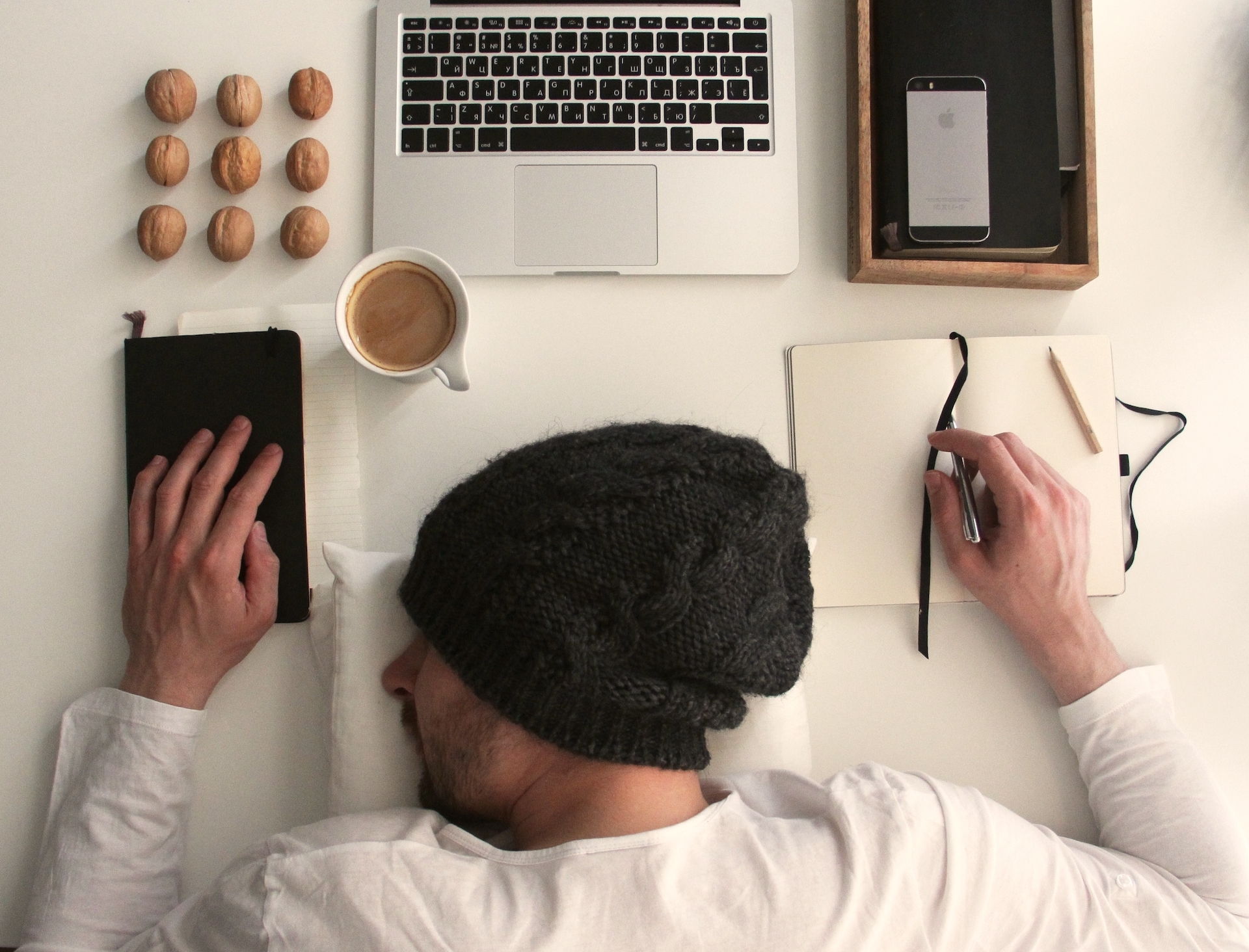 03 Feb What is the Sleep Deficit in Your Workplace Costing?

My friend used to get up when it was still dark, the sun just beginning to rise, strap on a head lamp and get outside for his early morning walk. His advice was, “Even if you don’t feel like it, put on your gear and go outside. Most days, that will lead to exercising.”

That part I agreed with—good idea to have a ritual to help you get your fitness in!

What if, on that day, what you most needed was more sleep? And yet, sleep-deprived, you got out of bed, got your gear on and went outside anyway? Maybe on that day the lack of sleep didn’t make much difference, but day after day, if sleep isn’t prioritized, it starts to catch up with you. Research shows that sleep-deprived leaders are less inspiring, more abusive, and not surprisingly, see less engagement in their teams.

For me, it’s always a toss-up—what do I need more of? The sleep or the exercise? Going to bed on time, or getting that project done? The sleep or the work? Competing priorities. In my adult life, most other things have usually won out over sleep. And believe me, I have paid the price! I have been committed for quite a while to look at how I can prioritize sleep.

To Sleep or Not to Sleep?

Our society doesn’t give a lot of value to sleep, and it often ranks below social media, exercise, other tasks, and most definitely, below work. Working harder and longer is still viewed positively, and losing sleep to get more work done is perceived as being OK. And yet, research shows that sleep deprivation reduces productivity—the less you sleep, the less productive you are, leading you to feel the need to work longer to get the same amount done, leading to less sleep. Seems like a vicious cycle to me! And it is really an oxymoron for organizations to strive to increase productivity without valuing sleep.

In a study conducted by Hult International Business School, which surveyed over 1000 professionals at varying levels, the results of sleep deprivation were found to lead to varying physical and emotional side effects. The study, aptly called The Wake Up Call, noted, “It is common for managers and colleagues to look at a lack of focus or motivation, irritability, and bad decision making as being caused by poor training, organizational politics or the work environment. The answer could be much simpler – a lack of sleep.”

Why We Should Never Question, and Always Prioritize a Good Night’s Sleep

The myriad of afflictions that have been linked to chronic sleep deprivation are well documented. Among them, is the increased risk of developing mental health issues. We used to think it was the other way around—that people with mental health issues developed chronic sleep problems. But, it is now believed that it can work both ways— a lack of sleep can lead to depression, and impairments in memory, thinking, concentration and emotional health. While a complete picture of sleep and mental health is not understood in its entirety, there is evidence to suggest that, “a good night’s sleep helps foster mental and emotional resilience” while poor sleep and sleep disruption, “wreaks havoc on the brain, impairing thinking and emotional regulation.” (Harvard Health, 2019)

Sleep deprivation is also linked to decreased immunity, a higher risk of heart disease and stroke, and an inability to regulate appetite, leading to weight gain. Studies also show that chronic sleep restriction reduces one’s ability to metabolize glucose, and increases the development of the hormone ghrelin, which causes you to crave carbohydrates.  Some researchers are even suggesting that the obesity epidemic we are seeing worldwide could correlate directly with a lack of sleep.

How A Lack of Sleep Impacts Performance in the Workplace

Issues that impact people impact organizational performance. When workplace disasters strike, we don’t often see headlines about what caused these unfortunate events. And yet, research continues to reveal how sleep loss, and poor sleep quality, can decrease our productivity, impair our decision-making abilities, and cause accidents. According to the Division of Sleep Medicine at Harvard Medical School, sleep deprivation has been shown to have been a significant factor in oil spills, nuclear disasters and medical errors. Poor sleep reduces our ability to access higher-level cognitive functions such as reasoning. When we aren’t well rested, we aren’t making the decisions we need to be in order to keep ourselves and our employees safe.

A deficit in sleep, if continued for four or five nights in a row can lead to the equivalent cognitive impairment of legal drunkenness. Bronwyn Fryer, contributing Editor to HBR.org, interviewed Dr. Charles A. Czeisler, the Baldino Professor of Sleep Medicine at Harvard Medical School, and he made the analogy that we would never say of an alcoholic, “This person is a great worker! He’s drunk all the time!” and yet we continue to give a badge of honour to those impaired by sacrificing their sleep.

Christopher M. Barnes, an associate professor of management at the University of Washington’s Foster School of Business, cites a 2017 study by the Center for Creative Leadership, indicating that 42% of leaders get six or less hours of sleep per night. An executive who starts their morning with a breakfast meeting and ends it with a late-night dinner, simply doesn’t have enough time to sleep more than six hours/night if they want to have any kind of life outside of work, and prioritize other events like exercising, spending time with family and winding down before bed. Says Barnes, “A first step for sleep-deprived leaders is to come to terms with just how damaging your fatigue can be—not only to you but also to those who work for you.”

Many organizations require their employees to fly back and forth through different time zones every week. I frequently get asked to speak on the other side of the country, which takes a minimum of 7 hours, catching 2 flights once I leave my home on the west coast. The time zone change may be 3 hours difference, and most clients don’t consider that flying a speaker across time zones the night before the event will not lead to their best performance. I have learned this the hard way by doing just that – flying into a different time zone the night before facilitating a full day’s session. Let’s just say it didn’t go as well as planned.

Another time, when I went on a speaking trip to Argentina, I experienced some serious physical symptoms as a result of sleep deprivation. After a 20-hour flight, I landed and was taken out to dinner by my hosts. I was dropped back at my hotel in the evening to discover they had booked me on another flight, leaving early the next morning to the first city I was speaking in. I would need to be up by 6:00 am! Jet lag makes you wake up at all hours, so now I had two nights of almost no sleep which gave me my worst migraine in memory. By the third destination, I had to cancel the media interviews they had set up for me and sleep the day away in a hotel until my evening presentation. I recovered and was able to speak, but it gave me a new appreciation for what international speakers go through, and I became very cognizant of bringing speakers in early for the conference that I ran, to allow them time to adjust to the time zone.

As an employer, these are some significant reasons to be concerned about the amount of sleep your employees are getting. Some companies are starting to take the sleep epidemic seriously and are providing employees with options and structures that support them in getting the sleep they need.

Take EventMobi, for example, a Toronto based tech company that encourages employees to nap at work. Their experience is that it increases productivity and company morale. For some people, just the time alone is useful, whether or not they sleep. Just a few minutes of rest can be rejuvenating, and most likely lead to more inspiring, creative work. Google was one of the initial organizations to introduce “Nap Pods” at work, and several other companies (even the library of Australia’s University of Queensland!) have incorporated spaces for people to have a mid-day break.

In an interview I did with Organizational Health Expert Mary-Lou MacDonald for my book “A Better Place To Work: Daily Practices That Transform Culture” we talked about the importance of promoting healthy sleep habits amongst employees. Mary-Lou likened a leader’s job to that of an Olympic athlete, saying:

“Athletes don’t show up at the Olympics without preparation. Creating and supporting a healthy workplace is also a 24-hour job. To reach my potential, what I do at home counts before I even head to work.

“Sometimes people think they can squeak by without paying attention to this, but I witness people dragging themselves around and being cranky because they’re tired. They think they’re entitled to be this way, but I believe it is disrespectful of those around you. As a leader it is your responsibility to set an example for your staff. It’s so important to be positive and turn every situation around the best you can.”

Changing the sleep deprivation epidemic means starting to value sleep. Put a price on it, and a high one! Just like mental health, we need to talk about it more, make getting a good night’s sleep normal, and make it an important business practice.

Are you getting enough sleep personally? What steps can you take today to improve your sleep habits and to promote sleep hygiene within your company?

Seven Practices to Improve Sleep in Your Workplace

As my career has progressed, I have realized that if I have a big event in a day or two, what is most important leading up to it is getting really good sleep the few nights before. More than any preparation I can do, if I am rested, I have the cognitive ability to do well and to give my best.

There is no question, the lives we lead are busy. The demands of work and family can be extensive and draining, and trying to “fit it all in” can feel overwhelming. But our relationship with sleep needs to change, it needs to be prioritized. In an interview with Dr. Czeizler, Bronwyn Fryer summarized his message about sleep by saying, “If you want to raise performance – both your own and your organization’s—you need to pay attention to this fundamental biological issue.” Sleep is crucial, and our collective lack of it is impacting organizations and workplace health in ways we are only just beginning to understand.

Join us for Deborah’s next online course 8 Weeks To A Better Place To Work starting again in April/20. Registration is open – save $200 if you register by March 7/20. Log in every week from the comfort of your office or home and join others, like you, who are engaging in new practices to improve the health and positivity in their workplaces. A complimentary copy of A Better Place To Work : Daily Practices that Transform Culture will be sent to you as a part of this course. It’s like book club, with online coaching – fun, informative and hugely practical! We’d love to have you there!

Deborah Connors teaches leaders to radically shift culture so that people can flourish. She is an engaging speaker, storyteller, author and coach.